About Imperial Moving and Storage

Imperial Moving and Storage is a tightly-knit team of professionals based out of Greenwich Village NYC. We are parents, friends, runners, gardeners, jokesters, and more. We are passionate about partnering with good people and organizations to produce exceptional moving service for all relocation needs. 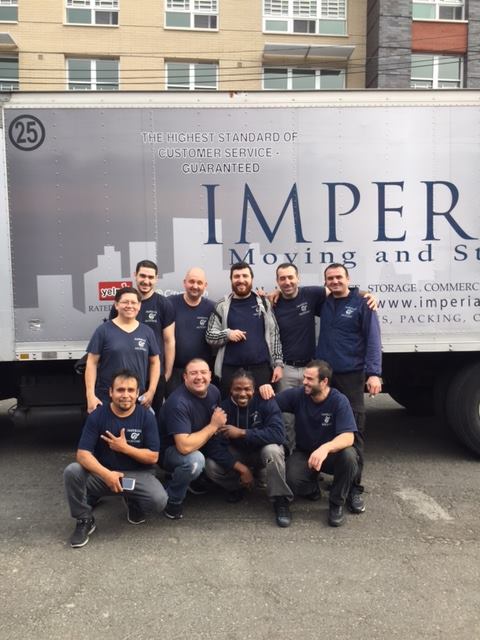 NEVER MOVE WITH IMPERIAL MOVING. They don't care about damages and won't reimburse you for fixing the damages. I had such a bad experience and will never recommend and rebook imperial company for their poor customer service.

We just finished our move and this was the worst moving company we have ever used. The packers threw things into the boxes, so many things broken. We were appalled when we started to unpack. The crew was late and never called pushing our move back by 3 hours. The salespeople on the phone were unprofessional and unhelpful. I wrote in with my dissatisfaction but no reply. Go with another company.

Horrendous experience. Completely incompetent movers. DO NOT USE

The quote for my move and pack was off by 50%. On the day of the move, only 50% of my belongings were moved to my new home. The sales associate was completely incompetent and had no idea how much time needed to be allotted. Thankfully I owned my residence for another few days so I could move the rest of my belongings. The response I got from customer service was completely disrespectful and appalling. They took ZERO responsibility for any issue I had. I have never had such an awful experience in my life and I live in NYC and move all the time. Under no circumstances should you use this company. Please don’t make the mistake I did.

After a lot of disappointments I no longer wanted to move but this time my job betrayed me and I had no other option in hand. After a long research I finally came up with Imperial moving and storage and they impressed me all the way! I moved an eight-room house including many full sized appliances, a grill, big furniture and what felt like a zillion framed pictures and boxes with fragile stuff. It was a LONG day for all of them but they didn’t do a single complain! The movers were super careful, courteous, respectful and good-natured. They were exceptionally competent and I would not hesitate to recommend them again!!!

DO NOT HIRE: WHEN THE MOVERS DEMAND EXTRA MONEY ON THE AT THE END OF THE MOVE, DO NOT PAY. ONLY PAY WHATS ON YOUR CONTRACT. I DID NOT PAY THE EXTRA THEY WERE DEMANDING AND THEY NEVER FOLLOWED UP ABOUT IT. THE OFFICE CONFIRMED THAT I ONLY OWED WHAT WAS ON THE CONTRACT.

After the job was completed the movers were DEMANDING hundreds of extra dollars. They told me they knew nothing of our contract or my sales rep in the Imperial office. I literally could not get them to leave my apartment unless I paid extra $$$. After an hour of arguing I finally got them out. It got a little worrisome when I couldn’t get them to leave my apartment. The main guy was scribbling numbers and calculations of why I owed them extra and his sidekick was laughing in the corner. This was a beyond appalling and HORRIBLE experience with your company.

Needless to say the way they packed my boxes was sloppy and unorganized.

This was HIGHLY unprofessional and appalling.

DO NOT USE THESE GUYS

DO NOT USE THESE GUYS

Estimate - Charged me $1000 over the quote, NEVER got an invoice detailing why. Called customer service 6 before getting a call back.

Move - Movers FORGOT MY STUFF at my old place. Was not reimbursed for finishing the move myself even though that's what they TOLD me to do. They wanted me to sign something saying I would not write a bad review if I wanted the reimbursement. Of course they didn't tell me that when they told me to do it, only when I sent them the invoice to get my money back. The letter they sent actually said that taking the money meant I was satisfied with my move. WHAT?!?!? So you forget my stuff, don't call me back, I have to hire other people to finish, go out of my way and back to my old apt to supervise the 2nd move and you think I am going to say I was satisfied and not write bad reviews for $200?!?!?!? BAHAHAHAHAHA. When I told him that was unethical they didn't even bother to reply...

Packing - The packers don't close any open containers so be ready for your lotions, oils, soaps, and anything else that can leak to leak. They just throw them in a box. They don't even bother to stand them up straight. Since they sell you the packing materials they over wrap EVERYTHING and boxes are half full. They broke the edge of my big mirror. Guess they hoped I wouldn't notice and I had a brand new switchblade go missing...

Movers - They were pleasant enough but they ate the snacks I had laying around the house and drank about 6 cans of coke from my fridge without asking. They used the bathroom and left streaks on the toilet. Luckily I was moving out so I didn't care but I didn't let them use the bathroom in my new place.

Save yourself some agony and use anybody else

Do not use this business. They have a pattern and practice of lying to their customers, overbooking moves, and abusing their crews. I used them recently for an out of state move. They drastically under estimated the amount of time it would take to pack my apartment. The crew they used had worked 30 hours in the two days before my move and were exhausted. After they were with me for 10 hours, the company demanded that they go directly to another job. They then switched out my crew, loaded the van with another move, and sent it to Maine, despite a promise to arrive in Massachusetts the next day by noon. I called their office several times. No one could give me a straight answer as to why my things were delayed. They had someone call me to say there was a problem with the truck, but this was a flat out lie. Both of the foremen involved in my move said the company lies to people all of the time. I called them about 10 times, and no one could connect me with management, no one apologized, and the only thing they offered me was $100 off my move.
I wrote to management and received no response. It's clear they lie to people all of the time and have no problem with it because they think they can get away with it.

These guys were amazing.
I had a move planned for the middle of March, but at the last minute, my new apartment wasn't going to be ready til April 2nd.
Imperial put my things in storage (at a minimal cost).
They moved me in and everything went great.
I will definitely use them next time and have told many friends to do the same.

Imperial was recommended by our friends, who moved in September, I'm glad we took their advise and used their services. The whole experience was superb. Movers were great at their job, very punctual and very efficient. Price was pretty decent also. Highly recommend!

HORRIBLE experience! Be warned. The company charged me double what they quoted and the following issues arose:
Boxes and packing materials I requested delivered on a Sat were not delivered until the Tues morning before my Wed move
Needless to say, this made packing my apartment difficult
My move was scheduled for 2-4pm
No one arrived until 6pm even though I'd let the company know my building's elevator can only be reserved until 5pm (thankfully my doorman looked the other way)
Only 2 out of 4 movers arrived at 6pm (2 hours past their scheduled window)
The others didn't arrive until 6:30pm
Only 1 of the movers did their job in a timely manner. The other movers went missing repeatedly for long smoking breaks
When I asked why they were gone so long, they laughed and said they're working
The move for my 1 bedroom took a ridiculous total of 8 hours - it did not finish until 2:15am!!!
One mover inappropriately reminded me which box he'd put my personal items in - 3 times
Being charged double the original quote for this unacceptable and unprofessional experience was infuriating. One of the movers even said he agreed that his coworkers were slow and unprofessional and that I shouldn't be charged extra. When I took this up with management, they refused to issue a fair refund. FIND ANOTHER MOVING COMPANY!!!