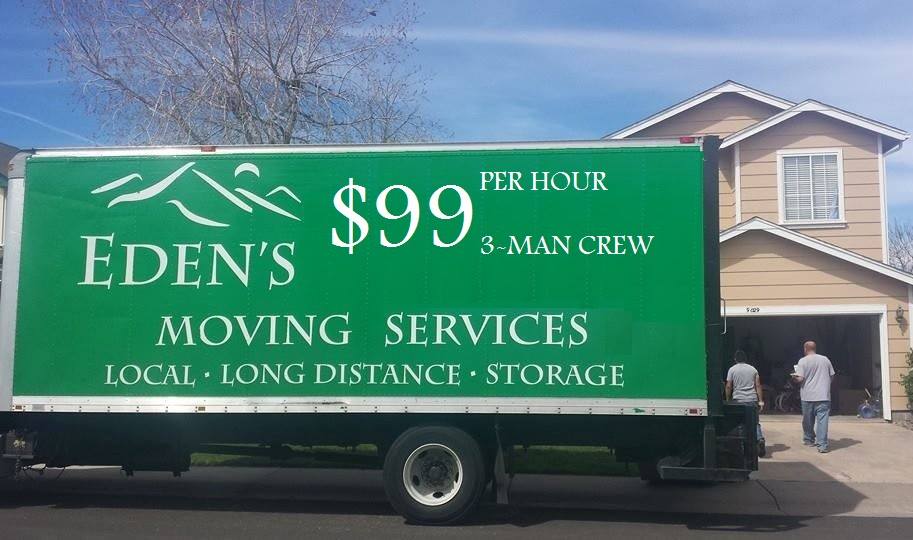 DO NOT LET EDEN'S MOVE YOUR STUFF!!

We have moved all over the world and this was by far the worst moving experience. It started to go bad right after the contract was signed and turned into a complete nightmare in the end. Here are just a few of the low-lights.

- We received 2 inaccurate estimates from 2 of Eden's estimators (missing items, 2 different long-distance measurements, added unnecessary wardrobe boxes & dish packs, used different prices for packing material).
- Jerked around by the 2nd estimator (Shakar) on re-estimate window. He moved the window twice and never called us. We had to call him when he missed each window.
- Foreman (Miguel) on the pick-up (in CA) wanted a "pay-off" for doing the right thing on the agreed price. He then got angry when he and his team didn't get a tip. It felt like a "shake down".
- We were charged for Carrier Pack materials that were either never used or were packed so poorly that the items arrived broken. The best example is packing our 55" TV in a picture box with 2 pieces of paper (no blankets, bubble wrap - nothing). We paid extra for the Carrier Pack materials expecting a professional mover to know how to pack these items. It was almost as if they did it on purpose since we wouldn't pay them off. Total incompetence on the part of the foreman (Miguel) and his team.
- Upon arrival, the 55" TV was damage beyond repair, our 2 floor lamps were destroyed, and the TV stand had a chuck taken out of the side. And, we paid extra for these to be carrier packed!!!!
- Even the foreman (Benedict) on the unloading side commented that this was the worst pack he had ever seen and took pictures himself.
- After notifying customer service (Gary), we got the run around for 2 more weeks and then received on insulting offer of $125 and a comment that stuff breaks and his explanation was that "accidents happen and our movers are human".

I cannot believe that the BBB can give Eden's Moving Services an A+ rating. This company is the worst run company that I've ever come across. The movers aren't trained, the foreman and estimators are unethical, customer service is horrific, and the owners don't take accountability for their company's mistakes/bad behavior.

Throughout this entire nightmare, we always had to chase Eden's and we only got excuses why it was so difficult to get any information from them. You would have thought that one of the owners would have reached out to us given everything that happened - radio silence from them.

Please do yourself a favor and don't let Eden's move your stuff. Don't be tempted by the low price like we were. You will pay for it in the end because you will have to replace all the stuff they break, and you will have a horrific experience.

One reason I gave my business to Eden's was because they are a small family business and I like supporting small businesses. Well Eden's give small family businesses a bad name. The owners of Eden's should be ashamed of the poor way that they conduct business. I have no doubt that Eden's will not be in business very much longer and the few employees that they have left should run for the hills. To the owners of Eden's, just remember that karma is a b____.

Foreman Aza and his crew did a suberb job. They did what they had to in order to fit all of our belongings into a limited space storage unit. They took all the stress of moving out of the equation. I would definitely recommend this company to others.

I don't usually post this sort of thing, but I am going to post this for my sister. Edens moving service charged my sister $1800 to move from Kansas City to Salt Lake City. She paid $1800. The movers were very disrespectful to her and her belongings. Heavy items were placed on top of items labeled as fragile. Moving blankets were not used properly to prevent rubbing between furniture. The truck was not packed correctly. As a result allot of her belonging were damaged. We are currently talking to Gary Goodwin in hopes the company recognizes its poor service.Why pay $1800 to have $500 of damages and not even get an apology.

This was my first time using movers and I made the right choice with Eden's Moving Services. I was pleased and surprised with their speed, professionalism and care. All my items down to the toilet paper were moved with care. Thank you Einstein Moving Company!

Excellent team at Eden's moving services, providing an excellent service, door to door, fast, easy with the highest of standards.
They provided us packing materials and sourced storage too for the entire move.

Their sales representative, Sam, was wonderful. Friendly, patient, organized went over with us on every little details and answered every question he could even not related to his responsibilities.

I fully recommended them to anyone who is looking a reliable responsive professional moving company. Would not hesitate to book with Eden's in the future.

Eden's Moving Services movers were on time with tons of energy and good vibes, friendly, worked hard and fast while taking good care of our things and even helped me repack two of my boxes that were not packed very well. It made a stressful day very enjoyable and easy. Great communication from the the first call. I Will absolutely hire them again and already recommend them to my sister in-law that had to move too two weeks after we did and she had the same excellent experience. Thank you edens for everything!

This is my second time moving with edens and I will definetly hire them again next time we'll need to move. Great customer care, friendly while professional, moved our home like they are moving theirs. Thanks edens for another easy fast move. You are awesome!

We hired edens for a local move in Denver CO. my wife was so worried from this move but Eden's movers did an amazing job from the beginning of the moving process up to the end of it. They handled our household goods very professionally and treat as they were their owns. They were friendly and did a great job. definitely deserve my recommendation! Thank you!

The folks were marvelous!!

I contracted Eden’s Moving Services about two months back after being doing my homework and getting bunch of quotes. The sales representative was pleasant and helpful and the folks they sent me were extremely proficient. They squandered no time and moving the greater part of my effects as fast as could be expected under bad weather. The quote they gave me via telephone was precisely what I paid. There were no concealed charges and I was exceptionally fulfilled. I already booked them again in three months to move all my stuff into my new house. The folks were marvelous!! I would prescribe them to anyone that needs awesome expert long-distance move.

The quote was not the cheapest we got but I preferred to get a estimate from a reliable company and not an estimate that will become double at the end of the move process (my sister had that few months ago). And edens were excellent. Very fast, professional, polite.I will use this company again. The crew that relocated us was very nice and hard working.They made sure that all our furniture, and boxes were where we wanted them to be, and were very attentive to our requests if we needed something moved elsewhere. We used their packing services, storage services (just for 9 days) and moving services to move from Denver to Morrison CO and the move went smoothly, as scheduled by us and mike, the sales rep we had.

I can't even say enough good things about these guys. very professional, super friendly staff! Awesome team of guys helped us move - careful with our belongings, got our piano in and out like champs and worked in a timely manor. Reasonably priced, not the cheapest quote I got but my instinct told me to hire them and I am happy I did. We moved from Roseland ,NJ to Denver ,CO. Used their packing service, free storage service, piano moving service and obviously the long distance moving service. Our sale rep kept organized everything and despite the fact we had a miscommunication about the pickup date, the rest of the move was great and on schedule. I highly recommend them and will defiantly book them on for next move.

Can't claim due to their invoicing error

I went with them based on their reviews and confidence, I was miss led about coverage. They underspec'd the job leaving us to take many items in our car (fully packed boxes that didn't fit on their trucks).

We have $1000s of dollars of damages and lost items! Which they won't let us claim due to an invoicing error. ( As soon as we wanted to claim, additional fees appeared even though we have a fully paid invoice and receipt ).

They didn't assemble shelves and bookcases that they dissembled (probably because they knew they lost peices).

David was terrible and explaining everything, miss led us about insurance, Percy is very rude and abrupt, Gary is much easier to handle but is hiding behind policy and doesn't care enough to actually help a customer out.

I used their moving services moving from Berkely CA to Boulder CO beacuse I got accepted to University of Colorado in Boulder. The office reps were super helpful, and they took care of all the arrangements. The guys came on time and in uniform, and everything was loaded onto the truck and and secured within a couple hours. They move quickly and don't waste time on the clock. The company was awesome for been able to squeeze me in with I think a short notice for a one bedroom apartment move. I felt 100% comfortable from the first phone call through to when they finished the job. I highly recommend them and very happy for the great moving experience that I got!